TWTR can’t catch a break. Well, they can’t catch a revenue stream is what they can’t catch. TWTR can’t make money. They can’t advertise, they can’t charge for services. They can’t build a premium layer, they just can’t do a thing about making mullah.
But they’re worth nearly $13B. Somehow they’re worth that much. And why shouldn’t they be worth that. They are the defacto standard for information instantly distributed to the WORLD. Every news service, every city, state, country, religion, personality, agency, government uses TWTR.
But they can’t make money.
TWTR is viewed as a utility. A built in right of the internet age. People don’t *pay” for TWTR. They get it for free — of course, duh! So how can TWTR make money? I don’t know. I really don’t.
Advertising? Nope.
Transaction fees? Nope.
Traffic piggyback charges on the carriers? Yeah right.
Their model for making ka-ching is bub-kiss.
Maybe they need to get bought by the US Government, nationalized. Really. They’re like the air traffic controllers of the internet.
Or how about  *** Value add ***
StockTwits and consensus tracking sites that swallow twitter feeds and use CEP handling (complex event processing) already perform value add. They make money using TWTR as a backbone service.
TWTR needs to do this too. Hundreds of sites use Twitter feeds to analyze sentiment. Why can’t TWTR? Well, they don’t have the right tools. Polling, tabulation, analysis tools. Flashvote like tools.
For TWTR to make money it must eat its children. It must consume those services that use tweets as fodder for knowledge generation. It has a huge information domain open to it — itself. It just hasn’t leveraged itself yet.
How can we become one of those tools that it needs to become profitable? 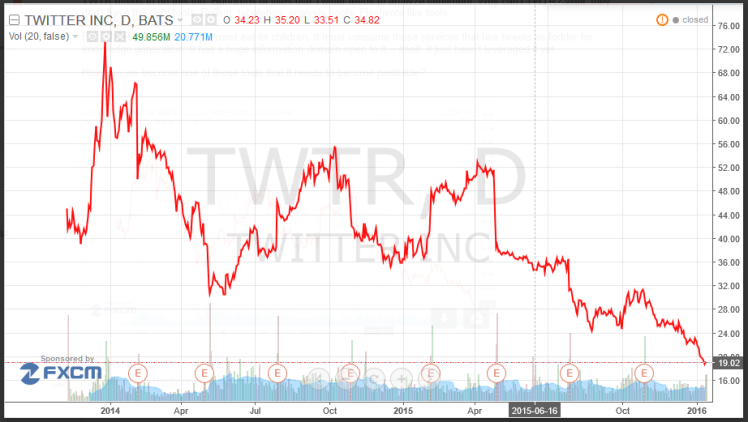 One thought on “TWTR can’t get it right”