Is the current “economic boom” over?

Although the unemployment rate is 4.4, this chart shows a more telling number:

“The employment-to-population ratio for prime-age workers, which measures the proportion of the population between the prime working ages of 25 and 54 who are employed.” 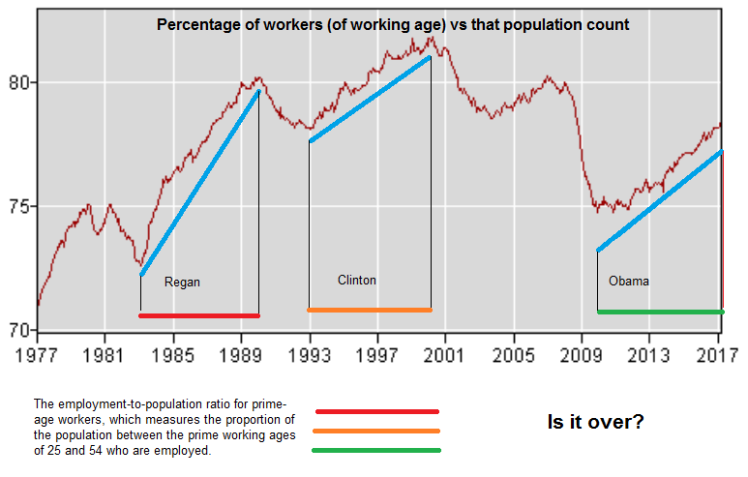 Not only this, there is another hidden factor, one we do not see even in this chart: what is the ratio of workers vs the TOTAL population? I’d have to say that this is much lower and sinking.

Why aren’t wages going up? Because there are so many people — not tabulated in this chart — those who have given up even trying to look for a job, though they could still work, who, when an opportunity presents itself, step in and go back to work.

If you had a huge inventory of canned peaches in your pantry, what would be the price you would pay for canned peaches in the market place? Pretty much nothing right? If you need peaches you just go into your spare peach pantry and pull out a can.

That’s the working economy these days. When new jobs show up, companies don’t compete to pay more for the rare peach who can do the job. They simply go out to the people pantry and pick up one who hasn’t worked for a year or five and start paying them their paltry wage. There’s no reason to increase wages when you have spare people, waiting on the sidelines, anxious to jump back in, if the opportunity is right.

I look at this curve and think: It’s over. Not just for this cycle, but forever. We’ve topped the chart in 2000 and the curve will now oscillate lower and lower. Work, as we knew it, is over.