[Sometimes I write to myself just so I have the thoughts persisted.
A thought written is a thought not forgotten.
This is one of those posts.]

First off this happens: Blue Across the Sea Epilogue, https://goo.gl/q6Hkj4 (a pair of massive CMEs destroy the Northern hemisphere’s electrical grid).

Coal and oil allowed the 19th and 20th and the first 1/3 of the 21st centuries to become the mega-food and people generating periods that we’ve seen thus far. Without oil, particularly, there would have been no way to produce the food that has produced, to date, 7.4 billion people. And, once sucked from the ground and burned, oil is gone. Humanity got exactly one shot at our technological advancement — and that shot has been expended. If 80-90% of people were to die off today, leaving about one billion, this would approximately represent where the human population would have been without coal and oil. And that would be it. No technological renaissance 2.0. One shot, bang!
[Cite: https://anonymole.wordpress.com/2016/01/21/drake-equation-more-on-the-topic/ ] 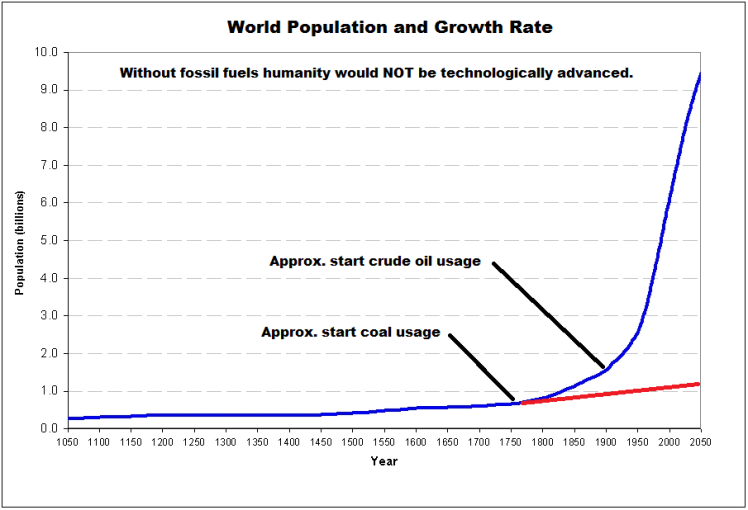 Okay, so the primary driver here was energy — in the form of oil — which produced food. Food is the crux, the fulcrum which makes or breaks all civilizations. I go into this theory in the previously linked post, but suffice to say, with out fossil fuels, humanity would never have attained the populations necessary to spawn the technological revolution. No great world wars (which require oil), no space race (which require oil), no massive move to the cities (which required food produced by oil). The tech revolution just wouldn’t have happened. Humanity would have burned whale oil until all the whales were dead. And then maybe hydrolyzed wood to produce methanol as a fuel, and of course ethanol from fermentation — energy is life. Without fossil fuels, we’d literally still be in the 1800’s

Now back to the post CME apocalypse: So, even though the buildings and cities and structures in the stories still exist, many were burned or ransacked after the sunstorm, but, yes the cities are still there, and the roads exist, and there are people who might still live there. But the major problem now is that food is scarce, similar to the 1600’s and 1700’s, but without the prior hundreds of years of people having learned how to leverage the land and live on less. Only the countryside can provide food now. There are villages and towns that exist and thrive, but without electricity – we’re back to the 1800’s at a maximum technological level — but without the possibility of being rescued by fossil fuels.

All the agriculture lore that the people of the 1800’s had available to survive — that has been lost. Horticulture? Animal husbandry? Those were reset to zero. Now, it’s been 230 years since the storm so there are enclaves and substantial areas thriving. But food is still the prime driver for all societal organization.

One of the ideas I use to justify the existence of stuff in this future world is by looking backwards about 300 years and thinking “what is here today that was built or made back in the 1700’s?” Books survive, some clothing (especially that made from non-organic materials). Roads, buildings, metal signs even, and metal of many kinds. Guns that were well taken care of, sure, but ammo is gone. Glassware, some plastic, pottery, many tools  but nothing made from rubber. Nothing electrical or electronic. But the wire would still exist and have been reused for other purposes. No engines or motors, as fuel hasn’t been refined for centuries. Although, in remote mountainous areas there are some solar cell systems running at perhaps 5-10% efficiency. And a few hydro generators still work in tucked-away places.

More on this to come.

11 thoughts on “Humanity’s one shot”