The film crew piled out of the rented van with Zane and Shaz still arguing about Harryhausen’s Medusa. The trip from Bristol had taken nearly four hours, with two of those hours consumed by pub stops along the way, one in Hardwicke the other, not twenty minute later, in Gloucester.

“Where are you going Zane?”

Their driver and handler, Simmons, gripped the head-writer by the shoulder. “Zane, the facilities are that way.”

An official-looking, blue clad woman arrived on the scene. She had a set of keys in her hand and jangled them in front of their faces. “Park’s closed. We closed at four pm. You’ll have to come back…”

“Whoa, their Mrs….” Shaz, the lead effects engineer and designer, leaned forward to read the woman’s name tag. “Mrs? Miss? Anyway, Wendy Reed, we’ve come ever so far to this one location…” Shaz seemed to remember the pints he and Zane had concealed and consumed in the car. “Simmons, you’ve got this, haven’t you?”

Simmons smiled with straight teeth, a present from his mum, and steered the park employee over to the van. “I know this crowd looks like a SOHO party at four a.m. and smells even worse but, they’re rather important cinematographers. I’m sure I over step my bounds here, and you have every right to be offended but, if I was to offer you, oh, a hundred pounds to let the boys…”

“Isn’t that a woman?” Ranger Wendy Reed pointed inside the open van to where Cynthia remained seated, talking quietly on her phone.

“You’re right, you’re right,” Simmons said. “No doubt my offense would be magnified if these two hundred pounds could convince you to allow the boys and girl, a few hours in the park, under your guidance of course, to research the site for certain cinematic characteristics.”

Wendy Reed’s eyes had never left the brightly colored bills Simmons flapped about. She nodded and pocketed the money.

The three men, Bryce had joined the group, sidled up, refreshed from the facilities, and stood expectantly before the ranger.

“Is that really its name, Puzzlewood?” Zane pinched the air in front him, perhaps mimicking the workings of a puzzle.

Not to be out done, Shaz asked, “Did Tolkien really traipse about these, um, forests seeking inspiration?” Shaz finalized his question with an exaggerated, not entirely sober grin.

Bryce had taken an interest in the ranger—once past her bureaucratic defenses, she began to smile at the questions. Bryce, the youngest of the crew and not all together incapable actor, had read of the place prior to their trip. He pursed his lips, an affectation Cynthia despised, and asked, “Wendy Reed, would you be any relation to the excellent actor Oliver Reed?”

Wendy Reed’s smile grew and a blush dawned like a fog-free London morning. “Puzzlewood, as you’ll see, is appropriately named. It’s the site of an ancient Celtic iron mine and yes indeed, master story-teller JRR Tolkien did indeed wander these parts. If you’ll follow me…” 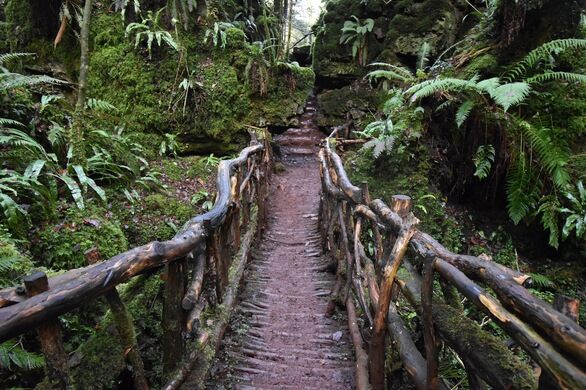