“Jan, come look at this one. Is that a pig wearing… a ribbon?”

Jan and his wife, Besra, had started out that morning set on hiking through the woods to the furthest reaches of Waltner Valley. On their map the terrain showed that a thousand foot escarpment encircled the far end of the box canyon. One way in, one way out.

Three kilometers into what looked like a twelve klick trek, they came upon boulders carved into figures. Stones the size of shuttle-pods, as tall as Jan, showed moss-covered mounds of rock chips piled at their base.

Besra kicked at the rubble and reached her hand to the snout of the smiling pig. “Look how worn the details are. And these fragments, they’ve been here for decades.”

“They look familiar. I can’t place them, though.” Jan wandered in a circle, his iEyes flashed a direction indicator when pointed into the forest toward their previously chosen destination. “The trail’s gone, but we can still find our way.” He took a sip from his camel-pack. “Does it look like, I don’t know, like a park in here?”

His wife took the offered spigot and said, “Let’s take vids. I didn’t see any mention of these when I searched the area online.” She sipped and swallowed. “Maybe there’ll be others.”

The couple began to notice shapes, many covered by mounds of pine needles, some emerging like mushrooms from the mossy forest floor. Besra took it upon her self to free the figures from their ageless slumber.

“There’re cats and more pigs and dogs and…” She used both hands to brush the debris and growth that had covered a shape the size of a booster-engine. “I think this is a mouse. The ears and nose… But look at how muscular it is. Some genetic test subject perhaps?”

Jan stepped cautiously around it helping to uncover the visage. “It’s wearing a cloak or something.”

Besra spoke the command to capture the vid. “Who would go to all this effort?”

“They’re getting more numerous. Lets…” Jan cocked his head. He spoke softly to his agent, then to Besra, “There’s a hammering sound coming from,” he rotated slowly, “there. I can’t imagine anyone still…”

Besra had stepped through a kind of gateway, shrubs built up to either side of a pair of ancient fir trees formed a kind of passage. As she entered she tripped a wire alarm. A sack full of empty cans toppled from high in the branches and fell in a cacophonous crash, the contents burst out like an exploded delivery-bot.

“Holy shit.” Besra launched herself sideways and fell up against another stone effigy, her shoulder knocking the woodland litter from what appeared to be a rabid badger, erect and as muscular as the mouse-thing. She cried out at its face, a pinched and grotesque snarl.

Jan jumped to her aid, helped her stand and reported that the pinging in the distance had stopped. “I think who or what was making that hammering knows we’re here.”

Jan picked at the cans. “Look at these things, they’re made of aluminum and, I think steel. Some are almost museum quality.”

Besra scanned the pile, lifted her eyes and froze. Thirty meters away, next to a boulder into which the relief of a bizarre auto had been carved, one with tubes as wheels, a man stood, nearly naked, his limbs spindle thin. In one hand he held a heavy hammer and a dark chisel. He steadied himself against the auto-boulder. 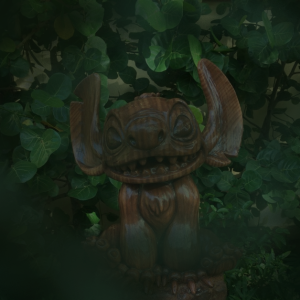