The USPS is a service.

A utility really. A vast network of delivery agents, offices, machines and infrastructure. Delivering the mail, packages and such is like delivering water or electricity or natural gas. It’s a Public Utility.

And, as a Public Utility the service of mail and package delivery should be executed, governed and controlled by a public entity.

There’s no need for such a service as the delivery of the mail or packages to be a competition. Corporations should not be in charge of such a utility as the delivery of goods from point A to point B. The USPS was created to do exactly this. But today, the USPS is under the gun as its contractual obligations to its employees runs afoul of its ability to compete in what should NOT be a competitive market place.

Next Day Air is just that. Two Day Delivery the same. There should be just the one entity that performs this service, at a publicly decided price. Period.

That glass of water you just poured, or the kilowatt of electricity you just consumed are both delivered, managed and priced by a Public Utility.

And so should mail and package delivery.

When this coronavirus is finally subdued:

When all this is said and done, Drumpf will have died from the virus (shot by an inoculated tranquilizer dart by Nancy Pelosi), and we’ll be resigned to living in a hyper-paranoid world where a six-foot distant “air hug” is considered affectionate.  Kisses — NOT!

In addition to apocalyptic scenarios, I also enjoy teasing out the possibilities of action/reaction in society’s macro behaviors. Like Freakonomics taught us, what are the implications to what we’re experiencing and how we’re reacting? Here are a few I’ve heard of and some I’ve dreamed up myself. My favorite is Goldie’s “there’s gonna be a rash of December babies born this year due to the work-from-home mandate.”

Close the borders and…

Close the schools and after school programs the daycare facilities and…

Shut down the hospitality industry and…

* Suppress spending across the entertainment, sports and restaurant industries and the velocity of money drops through the floor — ending up in a massive recession — one we’ve been expecting for three years.

* Drive the price of oil down below $30/barrel and the booming U.S. shale oil and fracking industry collapses throwing another million workers into the pit.

@ On the bright side, fewer cars on the road means fewer traffic accidents; less air pollution; quicker response to emergency calls (to save an elderly person with COVID symptoms).

* Force everyone to work from home and the homeless go WTF?

@ Is there going to be a resurgence of home cooking where millennials learn to make more than Mac-a-cheese and Ramen?

* Too bad Grandma won’t be allowed in the kitchen with those asymptomatic carriers.

* Millions were forced from their homes to live at the whims of the rentier society during the last Great Recession.

@ Although thousands more will end up being force to foreclose during this calamity, at least we know that the rich are just as susceptible to this scourge — so there’s hope a proportionate number will die along with the rest of us.

* Is this the end of the Farmer’s market? Craft fairs? Concerts in the park?

No doubt the unintended and unexpected consequences from this pandemic will continue to play out. How many more can we come up with? I’m sure there are dozens just waiting to be exposed.

There was a recent map published which showed population as area rather than area as area. What struck me was the juxtaposition of China and Russia.

When China needs to expand guess which direction they’re heading?

We wonder about Russia’s vast military build up, maybe we shouldn’t wonder at all. Russia’s might to fight the US or NATO or the EU? Naw, they have a much bigger problem south of the border. 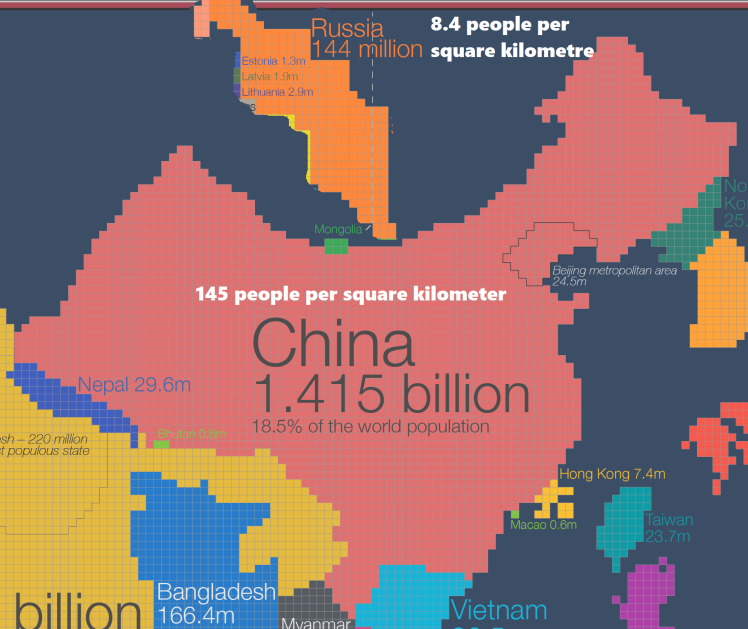 With global warming turning the Siberian wasteland into potentially viable farmland. That and access to the Arctic Ocean might entice a Chinese takeover of Eastern Russia. All them resources just begging to be turned into high tariff products bound for the US and elsewhere.

When you hear the sound of a helicopter(s), what do you think?

• “Oh, it must be a Life-Flight, or the Coast Guard out saving someone, hurry, hurry!”
Or
• “It’s the authorities come to spy/harass/nab me or someone I know.”
Or
• Nothing, you never hear helicopters or if you do you don’t even wonder about why they’re circling your home, neighborhood, town.

Helicopters are the ultimate urban assault vehicle. They can spy, (now from great distance), travel quickly without worry of terrain, and carry agents who can be dropped to carry out clandestine, “official” business.

When I hear them I immediately think “GO AWAY! You’re noisy, arrogant, and invasive.”

I wonder what most folks thing about the sounds of choppers? Apocalypse Now? The Flight of the Valkyries? FBI, regional police departments? Or the military (domestic or, yikes, foreign)?

Are we trained through media (movies and television) to worry when helicopters start flying? I wonder if there’s an economic threshold. The wealthier you are, the more you think helicopters are here to rescue you (or protect you) and the poorer you are…