Here’s a fun gimmick from Reedsy.

Here is the story you generated!

A geoscientist, who is an anarchist. A supercomputer, who is a chatterbox. It’s a post-apocalyptic story about the futility of ambition. It kicks off on Titan with the return of the Black Plague. (Note that: robots are fully sentient in this story.) And there’s a twist! It’s a dystopia.

Here is the story you generated!

A cabbie, who is hypocritical. A clone, who is sometimes rude. It’s an apocalyptic story about a search for identity. It kicks off on a dead star with the looming prospect of zero population growth. (Note that: someone in the story only wants to go home again.) And there’s a twist! There is an accidental bodyswap at one point in the plot.

Every story told comes down to the most basic of themes:

(My wife actually personified the difference between a want and a need when she related her eighth Christmas telling her parents: I want a record player, but I need a wagon.)

I went searching for inspiration along this line of thinking (story telling themes) and I happened to stumble upon a comment about Lord of the Rings. It’s not exactly related to this theme of character wants and needs but, it explains common plots so well that I wanted to share it:

Thomas Munch: “I think some of the best stories have a mix of all basic plots – Lord of the Rings is a good example:

Considering each of those plot concepts, every one (perhaps excluding Comedy & Tragedy) exposes that simple tenet: Stories are about characters’ wants and needs.

As I continue my WIP: A Touch of Red (a post-apocalyptic tale of a fallout illness that changes people genetically,) I’m trying to imagine it in various plot lights. But as the quote above illustrates, many plot themes can be applied to stories. So, really, post-analysis of any story might expose the the fact that stories fit many plot concepts and that the focus should be on the character’s fulfillment path of their desires and their essential needs.

Force a character to need something out of their grasp, instill in them wants that conflict or divert them from fulfilling that need and fill the page describing the tension between them.

Last night I watched Brandon Mull’s #9 video on youtube (he subbed for Sanderson). Mull is eccentric and idiosyncratic (to say the least). But his thoughts (once they come out) were spot on. From them I designed my own writing organization philosophy. (To be honest, Sanderson also poses similar story topologies.)

This cycle exists at the story level, the chapter level, the scene level and even the paragraph or sentence level.

An old man battles nature and himself, but in the end loses. He catches the biggest marlin of his life. In doing so he sails far from his home port. But the sharks attack and devour the marlin leaving him with nothing to show for his magnificent struggle. 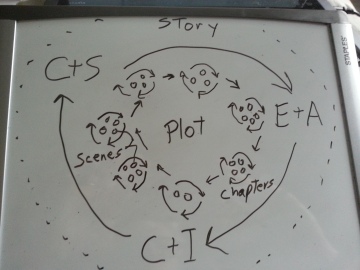 A story is a set of these cycles both concentrically, and independently organized. Like this:

I’ve never considered such a structure, however, as Mr. Mull continued, what he alluded to was that these self contained scenes (the little cycles within the bigger chapter cycles within the story cycle itself) can be isolated and written as standalone pieces. Much like the way Anthony Doerr explains how he wrote All the Light We Cannot See.

These scenes can then be stitched together with narrative which would include both time and space references: [detailed scene #1] — “Two weeks later the train pulled into San Francisco.” — [detailed scene #2].

I recommend watching at least Mull’s singular video. He’s hard to watch. He makes reference to his Mormon ideologies – cough. But in the end I found his advice useful.

No, not righting wrongs. I’ll leave that to the characters of our stories.

What I’m referring to is practicing the craft — but doing so, incorrectly.

We all know, a “writer writes” (both Billy and Danny say this in the movie), but what if what you write is wrong? Poor form? Grammatically, technically, logically, or structurally wrong?

If you practice and practice, but you’re doing so in a way that you will need to correct, perhaps severely, in the near future, then what you’re doing is learning bad habits.

Bad habits are hard to break.

I was a fool when I began. I dove straight in; the water was deep and dark and could take my plunge. Unbeknownst to me, there were snags and rocks and muck just beneath the surface — and boy did they hurt when struck.

I’d been an avid reader, effectively watching from the sidelines as authors plied their craft. “I can do this,” I thought. “Swish”, “Goal”, “Crack” — the sports analogies are many — fans feverishly following every movement of the hands and skills of expert players: “Sure looks easy from here.”

I’d have been better served by writing small pieces and having them tortuously shredded by an editor. I should have taken baby steps, careful, incremental progress. I’d have learned the right way to write. Instead, I created an unstable foundation the likes of which I’ve had to deconstruct and rebuild for years now. I’m explaining this in the hopes that some burgeoning, aspirational writer takes these cues and adjusts the arc of their career such that they build a solid foundation — first.

These are points of advice I’ve learned from many editors and writers, here and elsewhere. You know who you are.

Savory meats, root vegetables, maybe some thick noodles or dumplings, a fine rich stock all simmering for hours on low. The aroma and unctuous anticipation of slipping some of that luscious meal down your throat just makes your mouth drip like Sobaki, Pavlov’s favorite dog.

That is how I think writing becomes art.

When you can savor your characters, mull their foibles, their idiosyncrasies, taste the strange way they walk, sit, talk, sleep — then you can simply write them into your story. There is no work. You sit there within your story stew, nestle up to a potato and describe its grainy texture, its bitter skin, the way it appears to take over the bowl but with the press of a fork, crumbles.

Imagining all of your characters, in the story scenarios you want to eventually place them within, is, I believe, a necessary stage in writing a truthful story. True in that your characters are true to your notions of them. That how they react and respond to the story’s plot events is not forced or unnatural. But smooth like a saucy soup.

I’m trying to live with the eleven characters who will make up the story “Iced”. That’s a bunch of people, and I have to slip them in gradually. Only I can’t. They all wake up together. And, of course, every one of them is a murderer… So, I have this stew being unpleasantly hot at times, and laced with shards of splintered bone in others. But, hopefully, no one will choke and die. Well, no reader will expire while slurping this sumptuous stew.